Recent and Vintage Images of the Mill 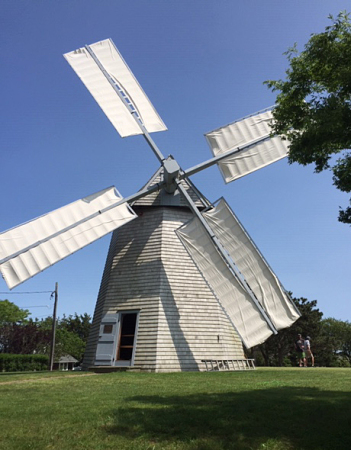 Being tall structures set in prominent locations, windmills have traditionally been used as a means of communication.  By precisely setting the position of the mill's arms (sails), notices of joyful or sorrowful events, or even mundane activities, such as whether the miller would briefly be away from the mill, could be seen by the local populace.

In June 2019 the arms of the Godfrey Windmill were set in the mourning position to honor the life of Bill Atwater, one of our millers, who passed away the previous January.  In the traditional mourning position the lower or ‘departing’ sail-arm is stopped just after it leaves its lowest point.  When the mill's arms are in this position, it can indicate sadness and mourning but it is also a sign of respect for a person of significance who has passed away. 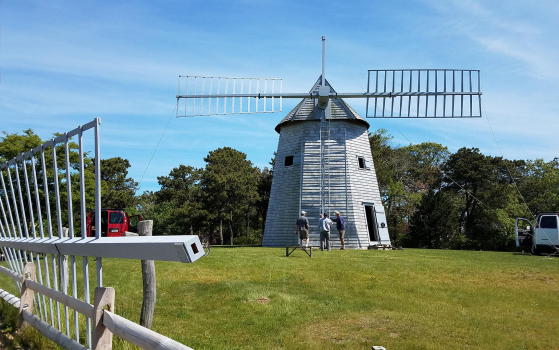 June 2019  - To prevent possible damage from winter storms, the sails (vanes) of the Godfrey Windmill are removed each autumn by Shrake Construction Co. (who were also responsible for the mill's historic restoration of 2009-12) .  The sails are put back on the mill the following spring.  On this day Andy Shrake and Jesse Lambert of Shrake Construction, along with Chatham Windmill Group members Bruce Paige, Dave Porter, and Frank Messina, made sure the mill was ready for our June 22nd Grinding Day at the Godfrey Grist Mill 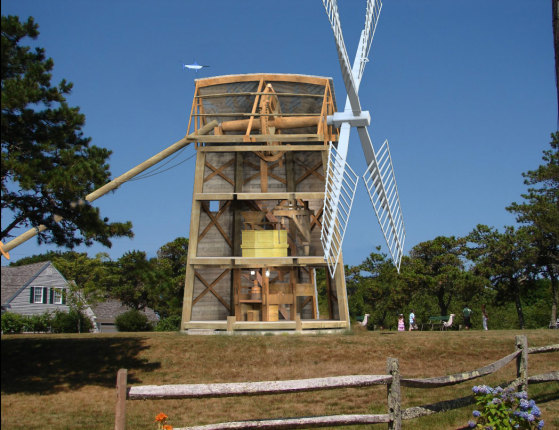 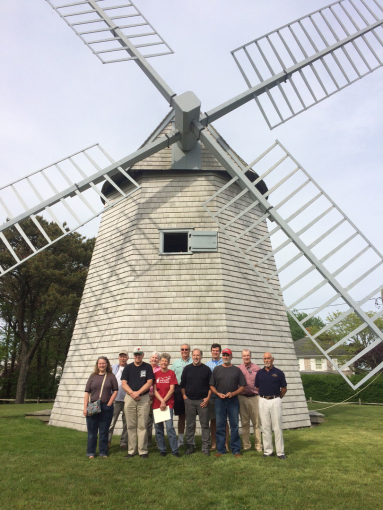 In June 2018 we were pleased to welcome members of the Northeast Chapter of SPOOM (Society for the Preservation of Old Mills) to the Godfrey Windmill.

The group visited a number of Cape Cod's windmills as well as the Stony Brook watermill in Brewster. It was an enlightening day for both the Chatham Windmill Group and SPOOM! 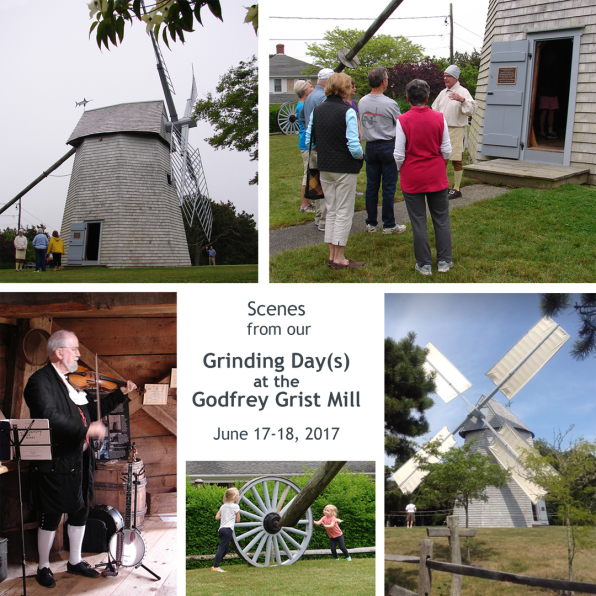 On Saturday the windmill was becalmed, but fortunately we were able to reschedule our Grinding Day for Sunday.  We remained open for tours on Saturday and visitors were able to enjoy the music of Edmund Robinson, who played traditional colonial music (including a song about a wind-powered grist mill!).  Col. Benjamin Godfrey (portrayed by Bill Cullinane) was present to relate tales of his life in 18th century Chatham. Some future millers (?) even put their shoulders to the wheel in an attempt to set the mill's arms into the wind.

On Sunday, with fair skies and better breezes, the mill was successfully set in motion and we were able to grind corn!

An rare sight - the Godfrey Windmill, as seen from across the Mill Pond, has reefed sails! (August 20, 2016) 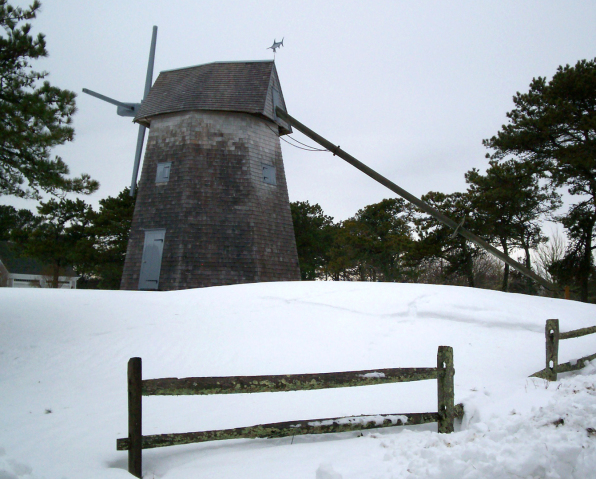 The Godfrey Windmill is unscathed following the blizzard of January 26, 2015 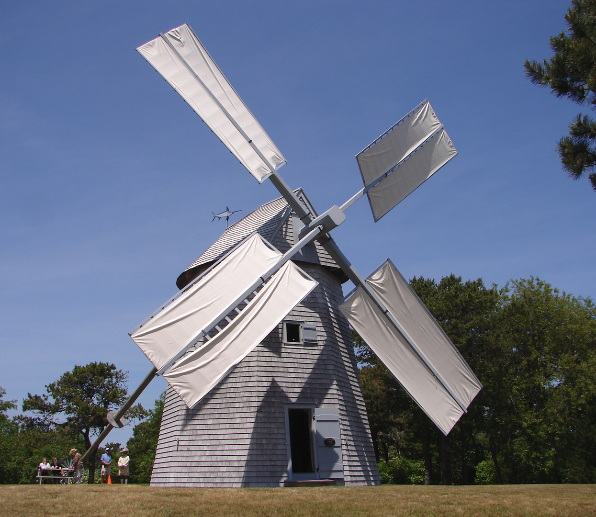 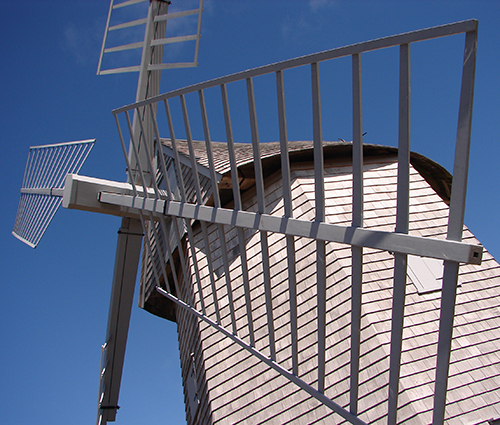 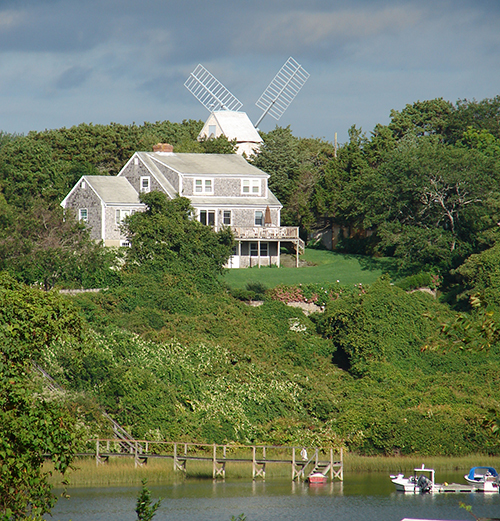 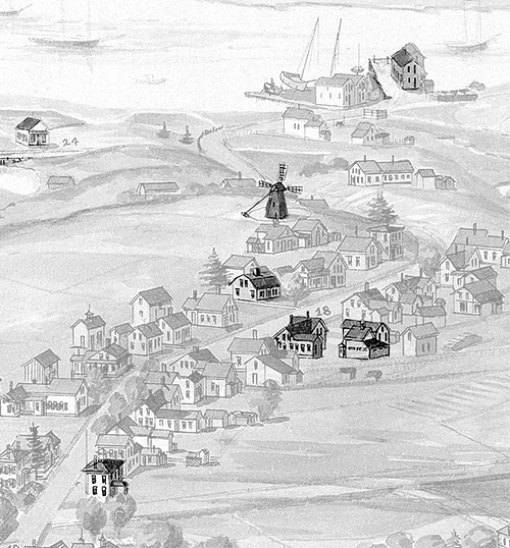 Detail of a "bird's-eye view" map of Chatham, published in 1894 by Geo. Norris. This view has been enhanced to more easily to see certain historic buildings (starting from the upper right and continuing to the lower left)

(the full version of this map can be seen at the Boston Public Library's Norman B. Leventhal Map and Education Center)